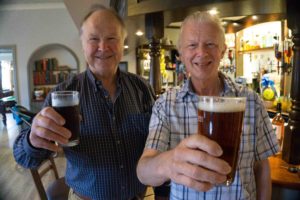 Like many pubs around the country, the Lapstone in Horton Heath is under threat of closure.  Since pubs are private businesses, their future is in the hands of the owners.  In many cases, the owners are large corporations who do not see the pubs as a place for the community to meet, but simply an investment opportunity and if it is not making enough money, it is sold on.  However, in the case of the Lapstone many regulars have grouped together to try to do something about it.  Once such regular is Gabriel Boland.  When County Councillor Bruce  Tennent heard what Gabriel was doing, he immediately put his weight behind the campaign to do what he can to help.

Too many community assets have been lost in the past, but now there is a legal entity known as a “Community Right to Bid” (Click on link for more information), also known as an “Asset of Community Value” (ACV).  Gabriel has submitted a bid to Eastleigh Borough Council where a decision will be made whether to the Lapstone ACV status. A crucial part of this process is providing evidence that the pub is used by a wide variety of local people, such as a Park and Stride for the nearby schools or by the local church as a regular meeting place.  If the Lapstone is granted ACV status, the next hurdle will be raising the money to purchase the pub and providing a business plan to run it.

ACV is very new and was primarily designed to save community assets in rural areas.  Horton Heath will be gaining many new houses in the next few years and will need its community assets even more.  There are numerous other pubs in Eastleigh under the same threat of closure, since in many cases the owners are large conglomerates who have purchased thousands of pubs purely for investment.

On the 5 April 2017 it was announced that the Lapstone Pub application has received Asset of Community Value status.  Very good news! I am very pleased with this outcome, since not only does it give a glimmer of hope that the Lapstone may be saved, it will provide useful experience for similar campaigns around the borough.