My personal view is that we are better off staying in the EU.  It is my hope that what I have written on the previous pages will help you gain a sense of what the European Union is and how we can benefit from being a member of it.  It is not just about the economy, there is a sense of belonging to a greater society.  A number of the newer member states were communist regimes not too long ago.  Their way of life is changing far more dramatically than ours and for the better.  There are a number of unknowns on both sides of the argument for staying in or leaving, but it is certain that Scotland, a pro-European country would want another referendum of their own if the UK voted to leave the EU, since they will would want to get back in.  There is also the certainty that Northern Ireland, Wales and Cornwall would want to stay a member of the EU since they are net financial beneficiaries of the partnership.

Much of what you will hear said against the EU is not backed up by the source of the information, so how do you know whether it is true?  Well if the information is reliable, the author will quote the source, however if you want to check out the validity of anti EU rhetoric, go to the fact checking website www.fullfact.org, the BBC News “The EU Referendum Reality Check” or the Office of National Statistics website; United Kingdom Balance of Payments – The Pink Book: 2015

There is a wealth of useful information that has been written about the EU, but the table below by Simon Sweeney sums up the EU very nicely;– 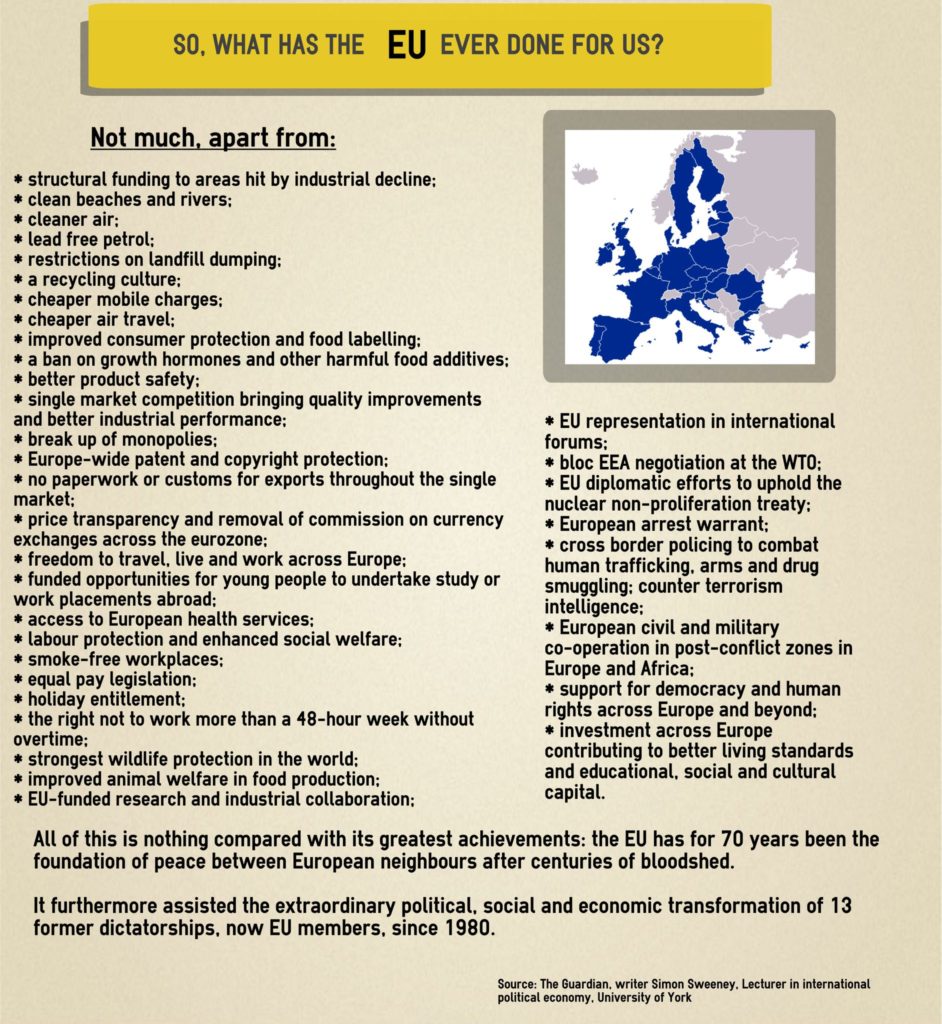 There are a number of Liberal parties around the world and one that the  UK Liberal Democrats align themselves closely with is Alliance of Liberals and Democrats for Europe (ALDE).

How much does it cost the UK to be a member of the EU?

The cost to the UK is one of the most used of examples of why we should leave the EU.  However, the administration cost in itself says little since we receive an instant rebate and then various areas of the UK receive additional EU funding simply because they are considered to be areas of high economic deprivation (such as much of Cornwall and Wales.  The figure often quoted as the UK’s contribution is £55m a day, but it is not the full story.  As an example of what is being reported in the press, examine three on-line News stories;-

Having read each of those articles have a look at the aforementioned facts website Fullfact. They have conveniently provided the information in graphical format;-

From the information provided in the Telegraph, Guardian and Full Fact, it is obvious that to just quote £55m a day can be very misleading.  Why not read Full Fact’s perspective on the issue  The UK’s EU membership fee

Norman Smith, one of the BBC’s political correspondents has made some short informational videos on the European Union.  View them by clicking on the following links;-

EU Immigration – Fact and Fiction
Immigration, the movement of EU citizens into the UK from other countries, is one of the big issues around the upcoming referendum on European Union membership.  Click here…

How many rules does the EU make?
Bent bananas, high heels and eurocrats,  the facts and the fiction about the European Union as a rule-making machine.  Click here…